Should you be worried about the rise in markets?

At every webinar, cocktail party or chat with someone, I encounter a familiar question – “Has the market run its course? Will it correct now?”  While I do appreciate the fear of correction among investors, I do not subscribe to that line of thinking.  Anyone who has seen a few market cycles would have reconciled by now that corrections are an integral part of wealth creation. While they unsettle investors in the short term, they have no bearing in the longer term process of wealth creation.

To make the best out of your investments, it is necessary to embrace the bull and bear markets, the ups and downs in the markets whole heartedly. Trying to participate in one and avoid the other will only break the magic of compounding and will result in a personal experience from equities that is very different from the true potential that this asset class offers. In the words of Warren Buffet, the Oracle of Omaha, “The most important quality for an investor is temperament, not intellect. Investing is 1% intelligence and 99% temperament.”

A lot of investors are obsessed about aligning to the best performing stock or the best performing fund to maximise returns. The most common question of investors is “How much return will I get from my investment?” Well, no one really knows the right answer as there are many variables, and a lot of factors that contribute to the end outcome called return. Instead the real question an investor should ask is, “How much time can I provide to my investment?”  In the above formula, ‘t’ is controllable, ‘r’ is not. The longer one stays invested, higher is the power of compounding.

While talking about Warren Buffet and his investment success, people always tend to overlook a very important aspect in his journey of wealth creation i.e. time. He has been investing in equities since the age of 11. The US stock market has had numerous bear phases and yet Buffet has been able to grow his wealth multi-fold with the help of his temperament, giving all the time to his investments and allowing the power of compounding do its magic.

We strongly believe that timing the market does not work and advice against it.  In fact, less than 1% people have gained by timing it. The rest have made money by staying invested for the long term. “The idea that a bell rings to signal when to get into or out of the stock market is simply not credible. After nearly fifty years in this business, I don’t know anybody who has done it successfully and consistently. I don’t even know anybody who knows anybody who has,” said Jack Bogle, the popular American investor and author.

In spite of all the evidence to the contrary, people still invest excessive time and energy trying to time the market. The reason is ‘Overconfidence Bias’ – a popular concept taught in behavioural finance. It is a person’s tendency to overestimate one’s abilities and skills as an investor, particularly in a bull market like the current one.  This bias tricks the brain into thinking it is possible to consistently add value to portfolio returns, avoid the downturns and then smartly reinvest in the upcycle. Data dating back last two decades in the US markets is to the contrary as Mr Markets drives an average investor into buying high and selling low, effectively pushing investor returns to levels lower than investment returns (refer figure below).

Over the last 20 years, Nifty has seen double digit corrections in 18 years and 9 of these corrections were 20% or more. It sounds like a risky place to be.  But, there is another side to the coin. During the same 20 years, Nifty has moved from 1,000 in January 2001 to 17,000 in August 2021. That is a 17x journey or a compounded return of ~ 15% over the last 20 years, beating all other asset classes hands down, particularly on a post-tax basis! 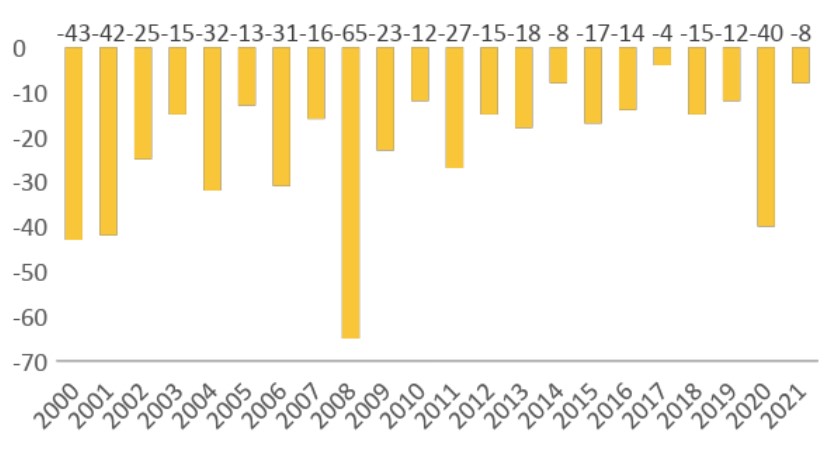 Do not quit during a correction

Shunning the equity markets during a correction phase may well be counter-productive. As highlighted in the above exhibit – the difference in total return reduces from 30x to a mere 3x if you miss just 30 best days in the markets. And, yes it may seem counter-intuitive but 18 of those 30 best days happened in the midst of a bear market. Once again, market timers ignore the harsh reality that 60% of the best return days occur in a bear market that they are working so hard to avoid.

Investors would do well to focus on staying invested instead of using market timing to avoid bear markets. Bull markets too are characterised by many intermittent falls which could be a trigger for an investor trying to time the market to stay out. Let us see some data points on frequency and quantum of these intermittent falls in the last two decades. 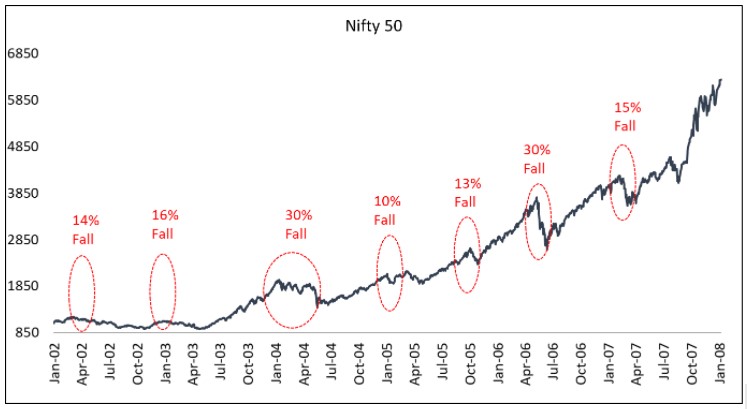 In the bull market from January 2002 to January 2008, Nifty 50 moved up by nearly six times from 1100 in Jan-02 to 6300 in Jan-08. This implies a compounded return of 33% per annum. However, during this short period of six years, Nifty went through seven double digit falls. Two of those falls were as deep as 30%. A condition where a security or market falls 20% of more from the recent high is classified as a bear market. This is what market timing seeks to avoid, right? We believe that the journey of 6x in 6 years is subjected to a higher risk by any such endeavour than an intermittent correction itself. 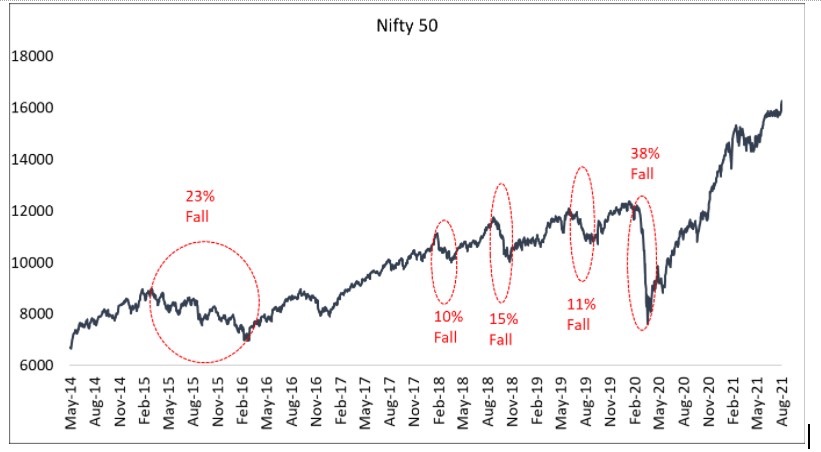 It is also important to remember that this has been one of the most challenging phases for the Indian economy with road bumps like ILFS crisis, de-monetisation, GST implementation, RERA, IBC, Covid and many more. It has also been an era of very poor corporate profit growth. And stocks are slaves of earnings!

All this brings us back to the most popular question of these times – Has the market run ahead of itself and so can it correct now? Just contextualising the above two examples with the current cycle, the journey of Nifty this time has started at 12,000 levels of the Nifty 50 pre-Covid in January 2020. And we are at 17000 levels now or about 1.4x. The ‘earnings beat and upgrade’ cycle has just begun (https://www.motilaloswalmf.com/blogs/ceo/miss-and-cut-making-way-for-beat-and-upgrade-disappointments-making-way-for-surprises/199) and while “history does not repeat itself but it does rhyme” (https://www.motilaloswalmf.com/blogs/ceo/d%C3%A9j%C3%A0-vu-is-fy22-a-new-avatar-of-fy04/214).

Just to reiterate our thoughts in the words of another great investor, Peter Lynch – “Far more money has been lost by investors trying to anticipate corrections, than lost in the corrections themselves”.

The Essence of Wealth Management

What Marketers Should do in this Covid-19 pandemic Introduction: