There is a quote attributed to Lenin (founder of erstwhile USSR) that “there are decades when nothing happens and then there are weeks when decades happen.” The quote seems apt as we hover around uncertainties in input price inflation, exchange rates and the global supply chain crisis being triggered yet again.

The performance of banking and financial services in an economy reveals the macroeconomic condition and presents insights into the performance of the other sectors that largely contribute to the country’s GDP. Financial sector accounts for 36 percent of the benchmark in India. It is therefore important to understand how the banking sector of the country is going to perform and the tailwinds that will drive the growth in these turbulent times.

India as an economy has been taking baby steps towards ensuring banking as a service is available to the mass market and the proactiveness of the government has been applauded in today’s context.

The government’s constant target at bringing mass banking operational at a large scale became possible when the PMJDY plan was initiated. According to PwC, India’s unbanked population reduced from 557 million people (44 percent of population) to 233 million (18 percent of population) in the year 2015. The government started transferring subsidies to these accounts and as a result these accounts had a balance of over ₹ 1 trillion by March 2020. The Indian economy was ready to contest the challenging times which the pandemic brought in.

Fast forward to 2022 and the Indian economy is marching steadily with its recent budgetary announcement where the GoI declared an increase in capital expenditure. This is expected to translate into high public sector spending on capex. Similarly, private capex is also expected to pick up in the coming quarters. There is more clarity on budgetary policies and GDP growth which would enable corporations to take investment decisions. The sectors that traditionally undertake large spending (energy, metals) are gearing up for new spending with a deleveraging in their balance sheet. Steel industry, for instance, has repaid debt of approximately INR 2 trillion during the last year. 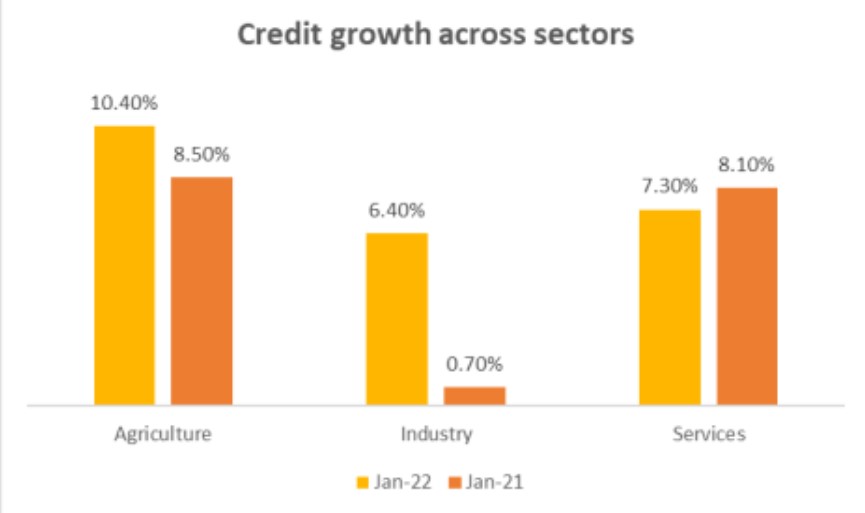 Credit growth needs to pick up for the economy to grow. As per the recent RBI data, there is a positive movement in the growth rate across sectors. Manufacturing sector is lagging behind and we would expect it to improve. Borrowing is dependent on capacity utilization and government’s initiatives like the production-linked incentive (PLI) scheme may drive the growth numbers. Demand recovery, industry consolidation and inflation, when it comes together, becomes a potent force for top line growth. Credit to deposit ratio will see a positive development.

Revival of the real estate sector is expected to serve as the catalyst for growth in the current context. The last peak for the housing sector in India was 2012-13. Since then, developers were over leveraged with tight liquidity conditions. This had even worsened the chances for existing projects to complete. Gradually the trend is changing, and India is entering into a new cycle of real estate boom.

Globally the banking business has suffered since the last few years and Return on Assets (ROA) of banks in the USA have hovered around 1 percent. In India, private banks have still fared well while maintaining ROA which is northwards of 1 percent. We will review the drivers which impact the higher ROA for a banking business and understand the growth opportunities in today’s context.

Net Interest Margin is likely to expand as banks will indulge more in the lending business. Globally banks have been quite conservative in their approach since the beginning of the pandemic and prudent lending decisions were taken by the management. As a result, a large deposit was placed on Treasury securities. The yield on those investments were lower but assured safety to the lender. In certain cases, banks absorbed mark to market losses as they purchased the security at a premium and there was a correction in the price when it was reaching maturity. However, considering the uncertainties, banks are preferring to stick to the front end of the curve.

Deposit growth may be modest in the next year, because ultimately, it’s a function of the central bank’s balance sheet. We’re heading into a high interest rate regime which is likely to stay in the coming years.

CASA as a source of financing is sticky in nature and private banks get the advantage at times of rising interest rates.

Banks would like to optimize their deposit beta and would take time to raise rates on the retail business. This would further squeeze the cost of funds as the spread increases due to higher lending rates.

However, the rebound in non-interest income from high trading revenues and growth in fee-based businesses could be more pronounced and lead to higher revenues. Investment banking, Asset Management and related fee income from services would play a key role in enhancing the profitability of the business.

In the US, deal activity in 2022 is expected to outperform pre pandemic levels. CitiBank’s Institutional Clients Group business that had revenue growth of 4 percent on YoY basis. This is the second best quarter in the decade which was possible because of the large scale need of mergers and acquisitions.

Provision reversal has started in banks as there are upgrades in the Gross Non Performing Assets (GNPA). Lower credit cost will ensure that banks have a higher capital adequacy ratio. This in turn helps the banks to be involved in cautious lending and increasing their NIM. 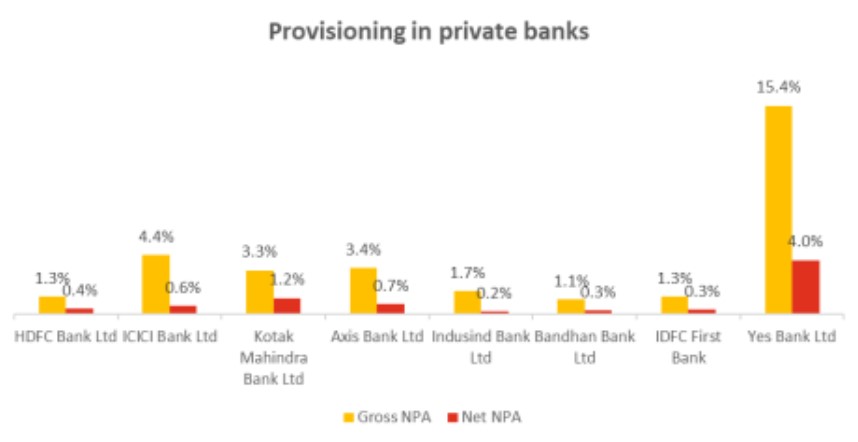 The conservative approach of bankers with a high provision coverage ratio (PCR) is likely to play out in their favor as the economy improves. When PCR is high and Net NPA is low, the bank would be more profitable in the long term. This thesis is likely to work in the private sector banks. 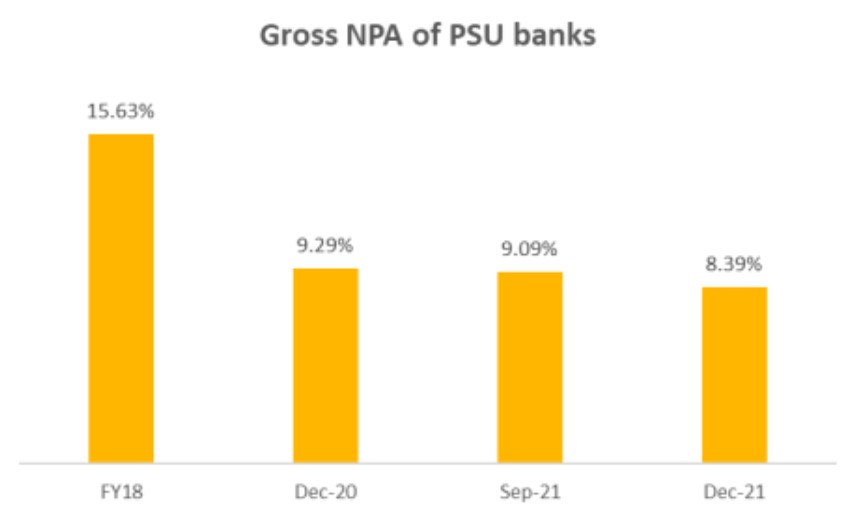 Public sector banks (PSBs) had registered losses of INR 26,444 crores during Q4FY20. This was on account of provisioning for all NPAs and since then the status for PSBs has improved considerably. It will be interesting to see how PSBs tend to perform now when the economy is steadily moving towards a growth trajectory.

Operating expenses have been at an elevated level across the industry, but cost income ratio will get corrected in the coming years. Banks are focusing on the underlying unit economics of customer acquisition. Most of the costs are front end acquisition costs which have an immediate impact on pre operating profit in a quarter. This is a key trend visible from the real estate cycle’s upturn in India.

Digitization will be playing a key role in lower operating expenses for the future. Banks are working with Google and Microsoft to run some functions on cloud and expand their cloud capabilities. JP Morgan Chase has informed that their fraud costs were lower this year. This is an immediate benefit resulting from the investments they have made in cyber threat and ransomware.

Banks as a business rely on operating leverage to an extent. The need to operate bank branches will gradually reduce in future and this will add on to profitability.

Unbanked population needs to be introduced to the ecosystem. As per a PwC report, micro, small and medium enterprise (MSME) still rely heavily on informal sources of financing. A

majority of MSMEs in India still rely on informal financial services for accessing credit. MSMEs owe a total of INR 69.3 lakh crore in debt of which INR 58.4 lakh crore is from informal sources. Customers today need customized products and services with a suitable ticket size that meets their needs. Traditional banking models are usually unable to offer such flexible financial products given the customer acquisition costs they maintain.

Partnerships with fintechs will be crucial for banks to meet the needs of the changing customer needs. Fintechs differentiate themselves through superior customer centric approach in driving business growth through cost optimisation strategies. They don’t have capital adequacy requirements that a traditional banking business have.

Cash flow lending or product based lending are better and a viable option compared to balance sheet lending as there is no need for regulatory capital. Moreover, operating expenses are lower as branches for banks are not needed. Pure-play neobanks have been a threat to the existing business model for the banks. With low costs and a closer propensity to the customer, they are winning businesses with tailor made contracts to suit the needs of the changing environment.

Fintechs are emerging as a capital light and ROE accretive model that’s posing a threat to the banks. Banks are partnering with Fintechs with an objective of mutual growth. Most of the fintech businesses are modeled around a specific problem solving structure. Generally, they are the first ones to address the problem.

Established private banks who already have a scalable model take a look at the large breadth and depth of the customer and have many problems to solve. Fintechs are focussed on the solution but are not able to move into adjacencies as they are primarily focused on a particular customer segment. Banks would be in a better position to complement this attribute with an approach of meeting needs at all points of the value chain.

There are more opportunities for alliance between fintechs and banks than what meets the eye. More specific businesses have emerged (edtech, healthtech, agtech etc). In India, Khatabook gives digital tools to support businesses, empowering micro, small and medium enterprises at a critical time – as the country undergoes a major digital transformation. Using this data, banks would be able to provide lending to the target customer.

Collaboration would be the best approach to resolve purpose-driven objectives such as making mass banking successful through financial inclusion programs being initiated at a scalable market. Fintech’s capabilities around generating insights on consumer behavior through cloud and advanced analytics will serve the bank’s purpose of meeting needs of the underserved segment.

Testing times are yet to bid adieu and steepening of the US 10-2 Year yield curve signals the worsening conditions in global financial markets. Commodity prices at an elevated level and a continued pressure on raw materials will be a crucial factor in determining profitability of corporations globally. The uncertainties will unfold and define the prospects of the global banking industry.

Disclaimer – The views expressed in this article are of the author and do not represent the firm’s views or opinions.

Buy Now Pay Later – The Future of Lending or a Regulatory Minefield?

The Essence of Wealth Management